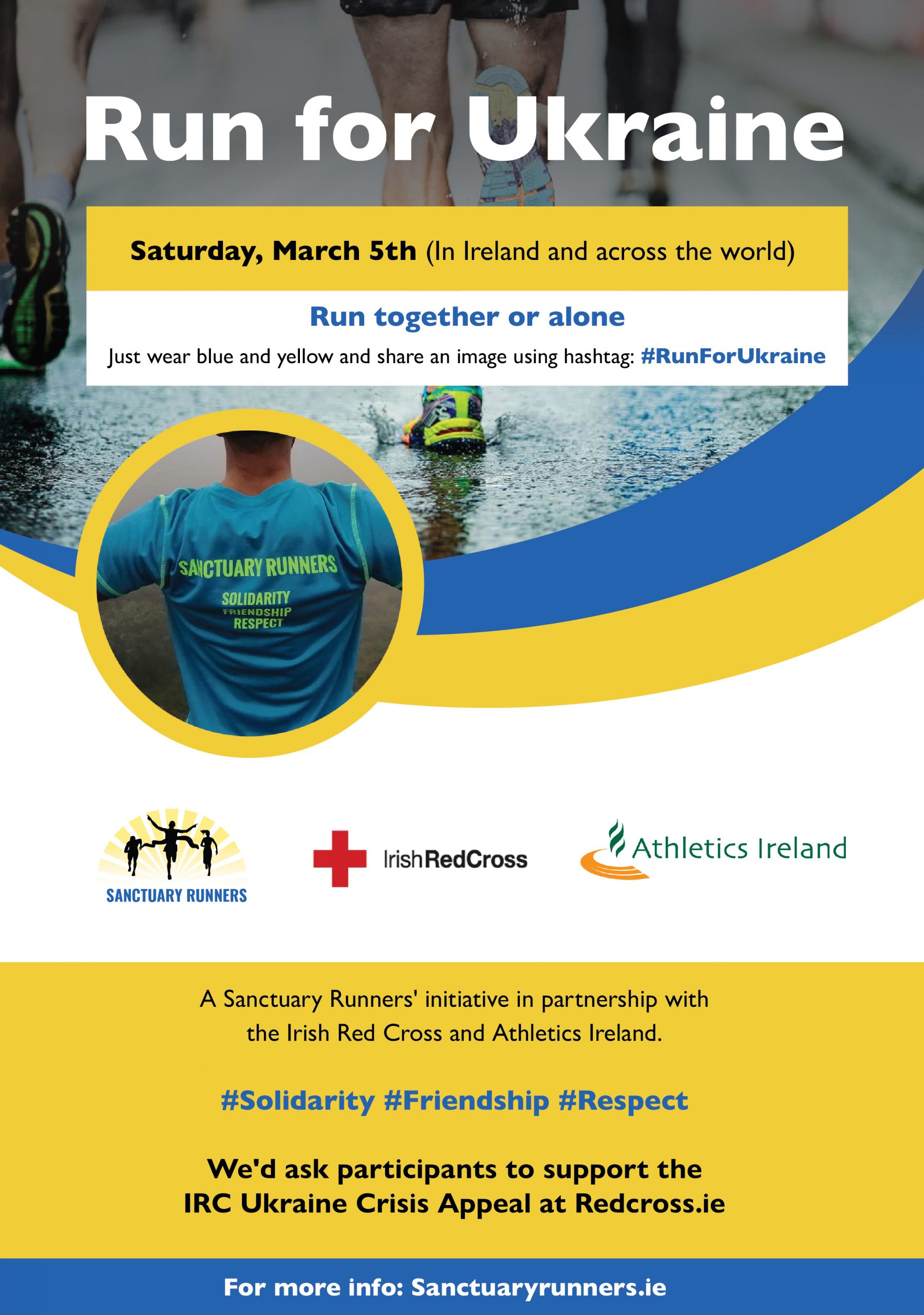 The Sanctuary Runners, a solidarity-through-sport initiative, has teamed up with some of Ireland’s leading sporting organisations to coordinate a ‘Run For Ukraine’ this Saturday across Ireland and the world – showing solidarity with the people of Ukraine and raising funds for the humanitarian relief effort.

A virtual run the initiative asks people to run, jog or walk any distance, anywhere at anytime on Saturday March 5th wearing the Ukrainian colours of blue and yellow – which are also the colours of the Sanctuary Runners.

Athletics Ireland, the Olympic Federation of Ireland, Swim Ireland, the IRFU and Rowing Ireland are all promoting the event within their organisations and online.

Already sports clubs, companies, schools, choirs and third level institutions in Ireland have committed to doing their bit on Saturday while the Sanctuary Runners have been contacted by runners across the world who plan to join in the ‘Run For Ukraine’. In some places groups of people are coming together to run, jog or walk – in other areas individuals will take on the solemn run alone.

Those who participate are asked to post an image of their efforts and post to social media using the hashtag #RunForUkraine.

Also they are asked, if they can, to make a donation to the Irish Red Cross Ukraine Appeal – https://www.redcross.ie/latest-appeals/ukraine-crisis-appeal/

Graham Clifford, CEO and Founder of the Sanctuary Runners said: “We felt the need to do something, to use running as a way to bring people together to support Ukraine. Many people feel helpless as the horrific scenes of Russian invasion play out on our television screens. We have Ukrainian friends and members in the Sanctuary Runners and we want to show our solidarity with them and all fleeing Ukraine and those remaining behind.”

He added: “Wherever you are in the world you can get involved. Lets run on one team on one day and let our feet do the talking – to deplore this inhumanity and while we show solidarity with the people of Ukraine today we also call for peace in other conflict areas across the globe where people suffer terror and persecution.”

The initiative has also received the support of the European Commission which has shared details of the run on their social media channels.

Hamish Adams, CEO of Athletics Ireland, said: “We stand in solidarity with our fellow athletes, club members and friends from Ukraine who are facing far greater challenges than just disruptions to their training and competition, but are in fear of their lives and the lives of their loved ones, the actions of Russia supported by Belarus cannot be tolerated. We encourage all Athletics Ireland Clubs and members to support this Saturday’s ‘Run For Ukraine’.”

For more information on the ‘Run For Ukraine’ just visit Sanctuaryrunners.ie