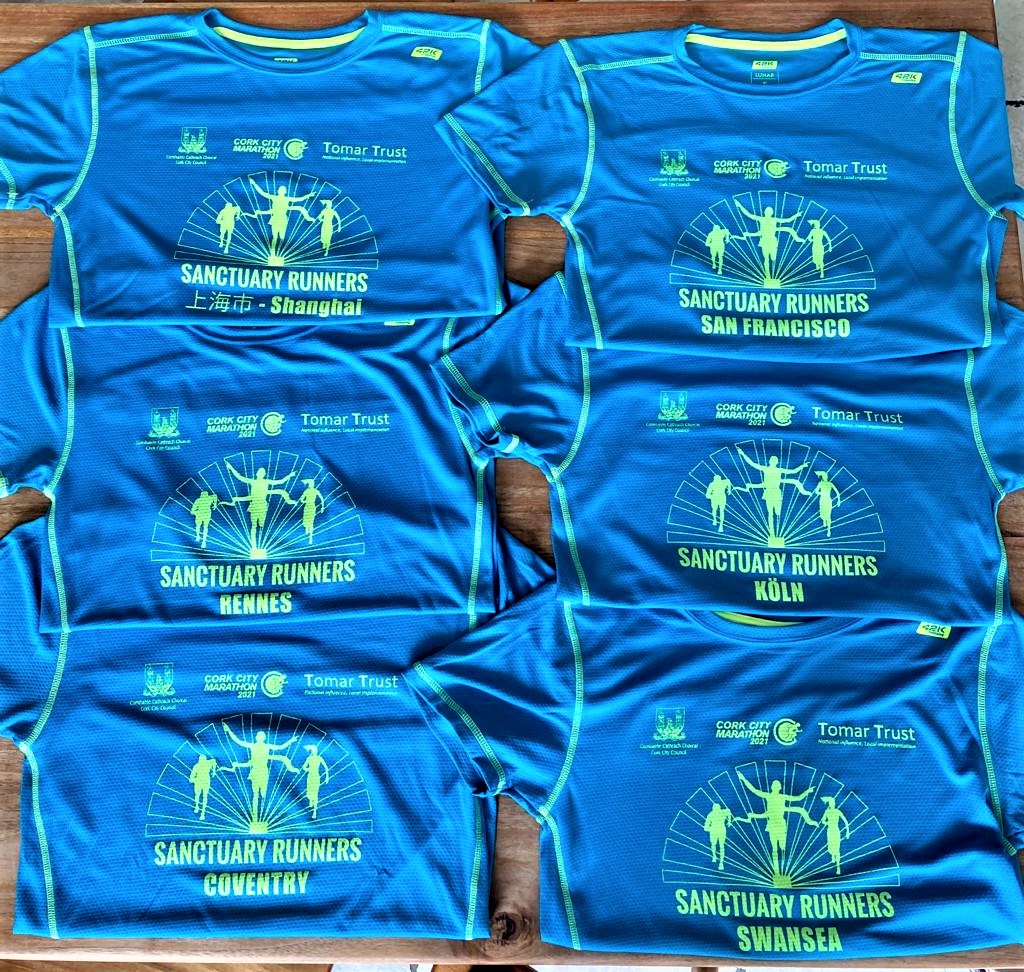 On Sunday June 6th the world will run on the streets of Cork City – virtually.

With a week to go until registrations for the virtual Cork City marathon close the Sanctuary Runners say they have already put together a team of 1,300 and are confident of hitting the 1,500.

And in Cork’s six sister cities local groups will be doing their bit on race day.

In Cologne, Shanghai and Rennes, local GAA clubs will be joining the run and spreading the welcome to people in the wider community with the support of the local authorities.

All the city’s have tailored Sanctuary Runner tops – all bearing the Cork City Council logo.

In Coventry the Migrant and Refugee Centre, and friends, are driving the initiative and in Swansea the City Council will liaise with the Swansea Harriers Athletics club and a local group working with refugees.

While the day will start will a lone runner in the early morning putting one foot in front of the other in Tokyo, Japan it will end with a large SF Runs group in San Francisco running near the Golden Gate Bridge.

“It’s an incredible global event and we’re so grateful to the Cork City Marathon organisers and Cork City Council for their incredible support. Though virtual it is a powerful reminder that we are all interconnected and that by doing something together as one we can show solidarity with migrants – including asylum seekers and refugees everywhere. The support from the six sister cities has been incredible and we’re so grateful for everyone’s help,” said Graham Clifford, Founder of the Sanctuary Runners.

Entries close on Thursday, May 27th by which time the Sanctuary Runners expect to see 1,500 runners on the virtual start line in Cork.

Graham Clifford added: “The first runner to lace up the running shoes and run in his Sanctuary Runner top will be Hirohiko Katayama in Tokyo. When we’re all wrapped up in bed Hiro will be running his symbolic marathon leg before our teams in New Zealand, Australia and China start to move. By the time we get running in Ireland there will have been Sanctuary Runners in action across Europe and Africa. Then on Sunday night after our runners in Brazil, Canada, New York and Boston have crossed their finish lines our large group in San Francisco will bring the curtain down on the day. Cork City will have visited the world and the world will have visited Cork City. And we’ll aim to capture it all in photographs and video clips on social media.”

Or sign up directly at   https://eventmaster.ie/event/vKkysPoSb4 and use the access code: Sanctuary21 to register for a symbolic leg of the relay as a Sanctuary Runner.