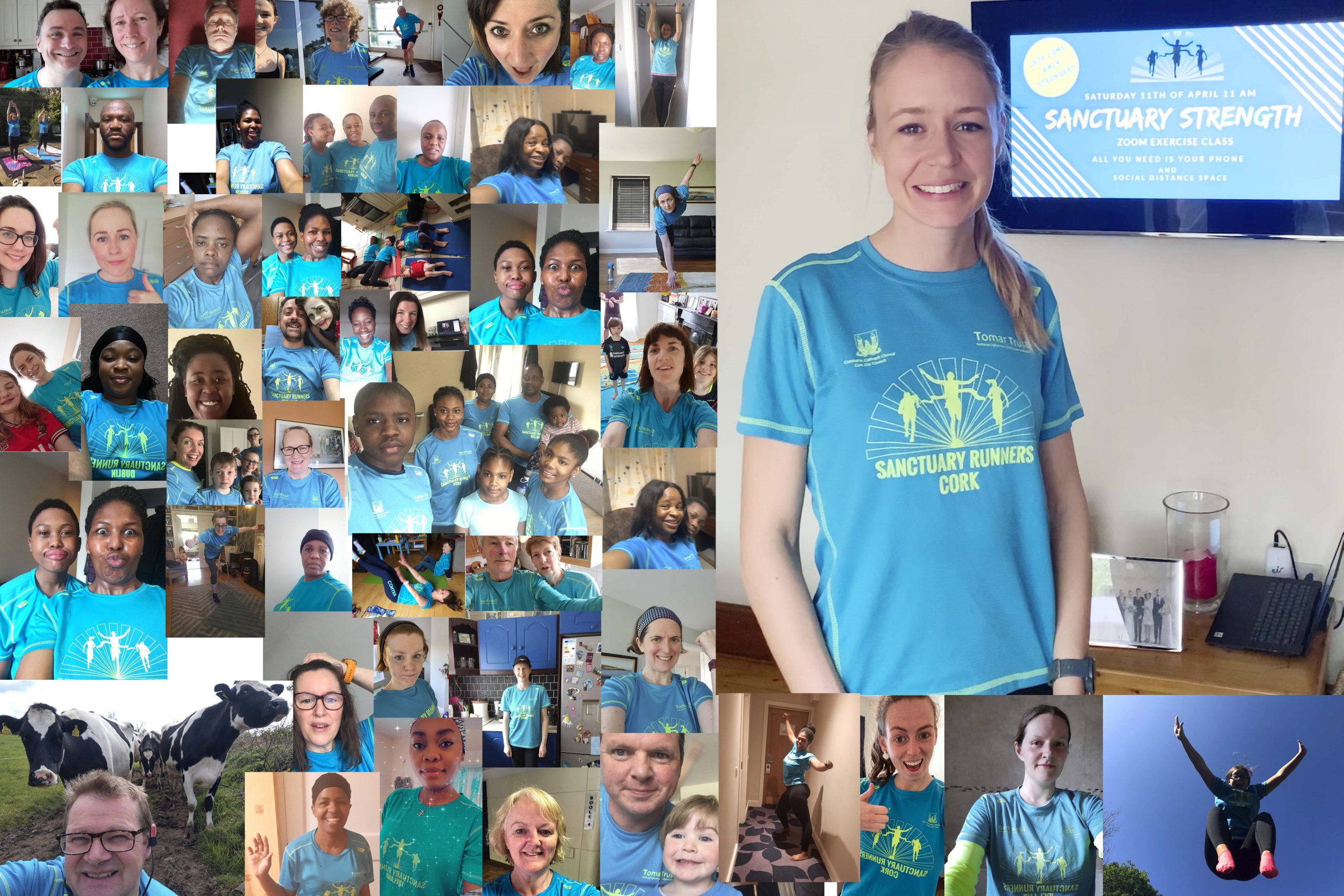 Olympians, asylum Seekers and refugees are virtually coming together every week to exercise thanks to an innovative project led by former Irish Olympian Claire Lambe.

A member of the Sanctuary Runners’ Movement, which uses running and exercise to bring together those in Direct Provision with the rest of Irish society, Lambe gives #SanctuaryStrength exercise classes online each Saturday morning with hundreds logging on to stay in shape.

And what’s more she’s roped in fellow Olympians to film videos in their homes and back gardens which Sanctuary Runners can access during the week.

“The Sanctuary Runners’ now has over 2,000 members across Ireland with about a quarter coming from Direct Provision centres. Normally we’d meet up to run every week but because of the Covid19 crisis that’s not possible – so I thought why not use technology to connect people and ensure they stay fit and healthy during this – even if they are living in the confined space of a Direct Provision centre.”

Each Saturday morning at 11am Sanctuary Runners (both Irish and in Direct Provision) log into Zoom for a half hour of energetic exercise hosted by Claire Lambe.
“Its incredible, we feel connected even though we are all apart,” explained Sanctuary Runner Deborah Oniah.

Living in Direct Provision in Cork she added: “Its very difficult for many in Direct Provision to exercise during this crisis and energy levels can drop but the #SanctuaryStrength class really lifts us, makes us stronger and lets us know there are people thinking of us and loving us. You don’t need lots of space to do the workout and its recorded and sent to us so we can do it over and over again during the week.”

Other Irish Olympians have joined the #SanctuaryStrength initiative as Claire Lambe explains:

“Olympic Silver medallist Annalise Murphy sent us a workout last week from her back garden which we were able to share with everyone. Thomas Barr, Sanita Puspure and Natalya Coyle have also filmed exercises and we’re so grateful to them. And Ciarán O’Lionáird is sending some exercise all the way from the States. We hope to add some more well-known names in the weeks ahead.”

Graham Clifford, founder of the Sanctuary Runners, said the #SanctuaryStrength initiative enables people to show solidarity, friendship and respect to those in Direct Provision during the Covid 19 crisis.

“For people living in Direct Provision the ability to exercise now will be greatly diminished. And people in centres are stressed because the chance of catching the virus is greater than for the rest of us. Many are living in confined spaces, sharing bedrooms, bathrooms, eating areas and so on. This enables people to exercise, to feel that virtual hand of friendship over their shoulder. We also have all of our Irish Sanctuary Runners – people exercising together as families from their kitchens, hallways, bedrooms, back gardens and even farms. Claire, and all the other Olympians, are making a massive impact to the lives of so many people through this. This is the epitome of the Olympic Spirit.”

If you would like to join the Sanctuary Runners, and take part in the #SanctuaryStrength exercise sessions drop us an email to info@sanctuaryrunners.ie

This website uses cookies to improve your experience while you navigate through the website. Out of these, the cookies that are categorized as necessary are stored on your browser as they are essential for the working of basic functionalities of the website. We also use third-party cookies that help us analyze and understand how you use this website. These cookies will be stored in your browser only with your consent. You also have the option to opt-out of these cookies. But opting out of some of these cookies may affect your browsing experience.
Necessary Always Enabled

Any cookies that may not be particularly necessary for the website to function and is used specifically to collect user personal data via analytics, ads, other embedded contents are termed as non-necessary cookies. It is mandatory to procure user consent prior to running these cookies on your website.